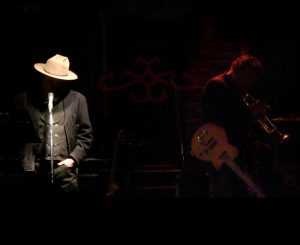 For years Harvard Educated Culture Activist, Stephen Jenkinson headed the counselling team of Canada’s largest home-based palliative care programme. He was assistant professor at a prominent medical school. Working with hundreds of dying people and their families, care-givers, nurses, doctors and social workers, he witnessed a ‘wretched anxiety’ at the end of life, and paid professionals stymied by it all. His inquiry led him to examine the dominant culture.

The documentary film Griefwalker (National Film Board of Canada) was made about his work. He taught what he saw and learned. Then he wrote about it all. In 2010 Stephen founded of The Orphan Wisdom School.

The 2015 tour for the award winning book Die Wise: A Manifesto for Sanity and Soul brought Stephen’s work to audiences around the world. People came, jammed doorways and stood on chairs and lingered long afterwards, unwilling it seemed to go back to a home unchanged by an unlikely evening of mortal mystery. The tour has continued through all of 2016, and shows no sign of coming to its senses.

The troubles of these days seem to ask that once in a while he goes out again beyond where he might belong. He comes with teachings of the ramshackling kind, about honour and grace under pressure, about elderhood in an age of age-intolerance, about the withering World Tree, about how we might learn our darkening times. And there are evening concerts, because he has Gregory Hoskins to lend his music and his road-tested grace to the cause.

Picture it: A storyteller. A band. An evening of mongrel sorrow, dappled by magic and wonder, fringed with regard for the gift of the tongue, harkening and hortatory and bardic and greying, steeped in mortal mystery.

What would you call such a thing? A Night of Grief and Mystery.

T E S T I M O N I A L S
…a night of being bathed in sound, tendrils of song winding through the words of a steward of deep wonder; at times a distant wail, and then a love song breathed right into the ear. These two skilled practitioners of rhythm could teach a stone to swim…AS

…I had no idea what lay ahead of me, apart from my naive expectations. With a heavy heart that Mr. Cohen’s days in person are now gone, I sat quietly, with a bit of a childlike curiosity and excitement to be in a dark room, with piercing words hung gently on musical notes – with a precision so accurate, my breath was stopped many a time. This was big. Everything about it. To me – Magical. Enlightening. Piercing. There is a brilliance that shone that late Saturday night – and I pray that the light continues to shine for many many nights to come. Bravo. Hearts Broken. Hearts Mended. All on one Dark, Luminous Night….RB

…A rich and powerfully nuanced evening woven together by deep storytelling, wondering and music. I laughed , I cried and watched as the night unfolded, a room full of strangers, that perhaps by the end of he evening, did not feel so much like strangers anymore. What Stephen and Gregory were able to conjure is something rare and mysterious. A true gift…ZD

…Toss all the big questions up in air and then listen to masterful and wise wonderings offered by Stephen Jenkinson and echoed in the rhythmic musings of Gregory Hoskins. An evening like no other and not to be missed…BB